3D
360°
Scan The World
1,897 views 194 downloads
Community Prints Add your picture
Be the first to share a picture of this printed object
0 comments

This is an Oscillum (decorative element originally linked to the cult of Dionysus, later a theatre ornament) with the head of Jupiter Ammon on the front and theatrical mask on the back.

L ' oscillum (diminutive of the Latin term osculum, in turn derived from os , for "face") was a type of small sculpture, representing a head, which in Roman times was hung as a votive gift to the fronds of the trees on the occasion of some parties, such as sementivae faeriae, or parties of sowing, or paganalia, the party pages, or rural villages, especially in honor of the god Bacchus.

During the Compitalia, parties in honor of the Lares, wooden figurines were hung representing the slaves and the children of the family.

Later they became decorations used in the interiors of houses or gardens and are also found in the form of small discs in relief, or even small rectangular plates, carved on both sides. They are generally made of stone or terracotta, but they are also known in glass paste. 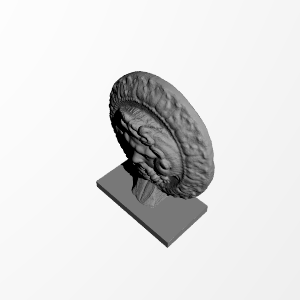 ×
0 collections where you can find Oscillum by Scan The World