3D
360°
Scan The World
2,391 views 220 downloads
3 collections
Community Prints Add your picture
Be the first to share a picture of this printed object
0 comments

The pose of this life-sized statue of Mentuhotep III, with the arms folded across the chest, identifies the king with Osiris. His body is enveloped in a tightly fitting garment, reminiscent of a mummy’s wrappings, from which only his hands protrude. A knee-length robe is barely visible beneath it. Holes through the hands indicate that he once held the crook and flail scepters that served, like the tall white crown of Upper Egypt, as attributes both of the reigning king and of the god of the afterlife. Traces of the long, curved beard of the gods may also be detected on his chest above his crossed arms.

The statue originally stood in the temple of the warrior god Montu at Armant in southern Egypt. It was one of six such figures that had been ceremonially buried beneath the floor when the temple was rebuilt in the Greco-Roman period. Although no longer needed in the new building, nearly two millennia later they were evidently still considered too sacred to destroy. The inscription running down the center is misleading because it identifies the king as the Nineteenth Dynasty pharaoh Merenptah. The text, however, was inscribed centuries after the statue was erected, perhaps at a time when Merenptah undertook renovations of the temple. Most of the other figures of Mentuhotep found with it are uninscribed
Provenance
From Armant, temple of Montu. 1937: excavated by the Sir Robert Mond Expedition of the Egypt Exploration Society; 1938: given to the MFA in recognition of a contribution of $3,796 to the Robert Mond Expedition of the Egypt Exploration Society.
(Accession Date: September 8, 1938) 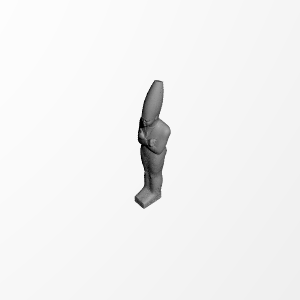 ×
3 collections where you can find Osiride Statue of King Mentuhotep III, re-inscribed for King Merenptah by Scan The World