360°
5,157 views 345 downloads
6 collections
Community Prints Add your picture
Be the first to share a picture of this printed object
0 comments

Owl Bear, designed by Fotis Mint is a beloved fictional creature originally created for the DnD fantasy RPG. An owlbear is depicted as a cross between a bear and an owl, which "hugs" like a bear and attacks with its beak. Owlbears, or similar beasts, also appear in several other fantasy role-playing games, video games and other media.

Fotis Mint is a part of the Studio Designers group, When Fotis started Studio's he was an amateur hobbyist. "The community helped me understand the right path for me, I realized CAD wasn't providing me the freedom I needed to make art. Watching great members of our design community creating wonderful art pieces with 3D sculpting made me want to learn as well. The MyMiniFactory community gave me the motivation I needed and the belief that this could be something more" This is what ultimately led Fotis to sculpting and paved the way for him to go from hobbyist to a full time designer. "I'm thankful for the people at MyMiniFactory who've been there since day one!" 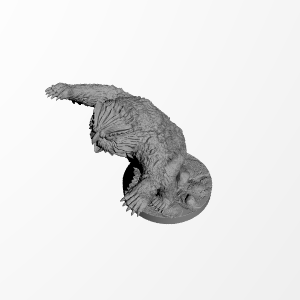 ×
6 collections where you can find Owlbear by MyMiniFactory