3D
Scan The World
3,296 views 208 downloads
3 collections
Community Prints Add your picture
Be the first to share a picture of this printed object
0 comments

One of Chicago's most magnificent examples of art deco architecture, The Palmolive Building has changed with the times and adapted as the city modernized around it. But the building remains as classic Chicago as runny eggs at a Loop diner, or a fedora hat worn on LaSalle Street. The Palmolive Building presents a narrow side to the winds of Lake Michigan, while broadly looking over the heart of Chicago. Its setbacks have setbacks and the whole thing looks vaguely reminiscent of those shiny, stylized steam locomotives that only seem to exist in French poster art of a certain age. The building began life as the headquarters of the Colgate-Palmolive-Peet company. Its placement was an important visual cap to mark the end of Michigan Avenue at a time when the boulevard was a fairly uniform collection of posh shops and apartment houses. Like so many companies that got their start in Chicago, Palmolive would move on. It left for New York in 1934 but the building kept the Palmolive name until a publishing company called Playboy Enterprises moved in in 1966 and give its name to the skyscraper. As the publishing industry collapsed at the turn of the 21st century, Playboy moved to smaller offices in the neighborhood and this building once again became known as the Palmolive Building. As the decades passed, the city grew up around The Palmolive Building. Today, the art deco tower provides an important visual and stylistic link in a progression from the historic Drake Hotel to the still futuristic John Hancock Center. Though it once stood proudly as a sentinel over North Michigan Avenue, today The Palmolive Building is lost in the city's skyscraper forest. As its neighbors grew taller, they also grew more demanding. The Palmolive Building's historic aircraft beacon was snuffed out when the residents of neighboring high rises complained about the light.  In the 1980's, the Chicago architecture firm of Skidmore, Owings & Merrill renovated the lowest floors into better retail space. From a shopping standpoint, it was a success and works well with the rest of Michigan Avenue. But the result is divorced enough from the tower above that one can walk right past The Palmolive Building and not realize it's there. And then in 2004, the process began to turn this office building into residences. The conversion by architect Laurence Booth was successful, with little visual impact on the building. In fact, the building is somewhat more interesting today as the people who live in The Palmolive Building have installed art, plants, and even putting greens on the art deco setbacks they've turned into open-air patios. Conversions of so-called "vintage" buildings into residences are rare for such tall buildings. But the units generated are often sought after as pieces of art, themselves. 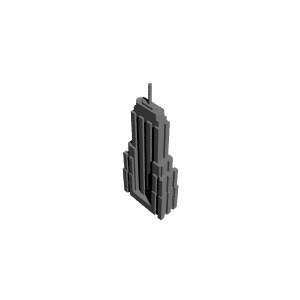 ×
3 collections where you can find Palmolive Building in Chicago, Illinois by jkurstin22