3D
Scan The World
4,586 views 252 downloads
3 collections
Community Prints Add your picture
Be the first to share a picture of this printed object
0 comments

In Greek religion and mythology, Pan is the god of the wild, shepherds and flocks, nature of mountain wilds and rustic music, and companion of the nymphs. He has the hindquarters, legs, and horns of a goat, in the same manner as a faun or satyr. With his homeland in rustic Arcadia, he is also recognized as the god of fields, groves, and wooded glens; because of this, Pan is connected to fertility and the season of spring. The ancient Greeks also considered Pan to be the god of theatrical criticism and impromptus. The word "panic" is a tribute to the god.

Such a subject is typical of the Neoclassical movement, seaking to rebound with Classical Greek and Roman art, by taking over not only their themes and culture but also their technique. It is also the movement which is promoted by the Academies of Fine Arts in Europe. 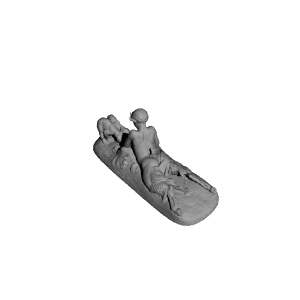