3D
Support Free Scan The World
3,818 views 213 downloads
Community Prints Add your picture
Be the first to share a picture of this printed object
0 comments

Panchanana Shiva is Hindu God Shiva with five faces. Panchanana is also referred as the five emanations of Shiva. Siva appears in this form in the Panchamukha Shivling found in very rare temples. Four faces are in four directions and in some Shivalingams the fifth face is shown facing the sky and in some it is the southeast direction. The five faces are known as Ishana, Tatpurusha, Aghora, Vamadeva and Sadyojatha.
Ishana faces south east or faces sky or zenith. It is the highest aspect and represents Shiva as Ishwara. In this aspect he is also known as Sadashiva, or the Eternal Siva. Symbolically, it represents Shiva ruling over the sky. Spiritually, this aspect of Shiva grants liberation or Moksha. 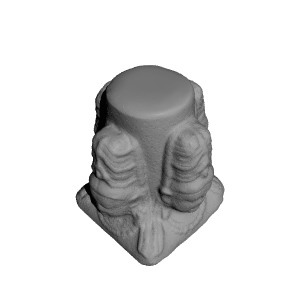 ×
0 collections where you can find Panchamukha-Shivalingam at The State Hermitage Museum, St Petersburg by Scan The World