3D
Scan The World
2,204 views 148 downloads
3 collections
Community Prints Add your picture
Be the first to share a picture of this printed object
0 comments

Panchmukhi-Maruti Maruti means Lord Maruti with five faces. Maruti is the eleventh manifestation of Rudra and is known by names such as Hanuman, Rudra-avatara (manifestation of the Storm Deity), Anjaneya (Anjani's Son).

The four heads arrayed on either side of the shoulders of the monkey-faced lord are those of a boar, a lion, a horse and an eagle. The heads of the Pancha-Mukhi Maruti shown here symbolize the incarnations of God Vishnu (Preserve of the Universe) as Lord Narasimha, Varaha and Hayagriva and the eagle is associated with Garuda, the mount or Vahana of Vishnu and thus Vishnu himself. Maruti assumed the attributes of incarnations of Lord Vishnu as Lord Narasimha, Garuda, Varaha and Hayagriva to kill 'Ahiravan and Mahiravan' who allied Ravana in a battle against Lord Rama. 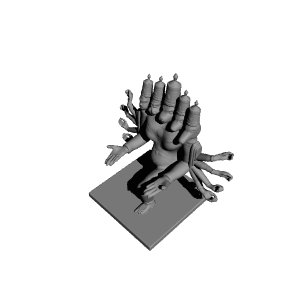