Panel 3 of Piedras Negras (no base)

3D
Scan The World
2,644 views 77 downloads
Community Prints Add your picture
Be the first to share a picture of this printed object
0 comments

Panel 3 of Piedras Negras (no base)

For its artistic refinement and aesthetic conception, Panel 3 is the most extraordinary example of Classic Maya sculpture. Carved by the 7th ruler's commission, it represents the commemoration of K'atun's jubilee of his father, ruler 4, attested by other members of the royal family, local nobles and visitors of Yaxchilán. Its composition, framed in a hieroglyphic frame, consists of three groups of human figures. In the center presides over the Ruler 4, seated on a throne. Both the whole headdress adorning the head, which includes quetzal feathers, as well as the ornaments of his belt and loincloth of interwoven canvas, were masterfully drawn. The right arm, now lost, probably stretched upwards, while the left one rests on the edge of the throne. Behind the figure of the sovereign is a cushion of jaguar skin and in the background the back of the throne is distinguished, sculpted with iconographic motifs. The group on the right consists of four standing human figures: two infant princes, perhaps the future Ruler 7 and Moo Ahk Chak of La Mar, accompanied by two adult courtiers, who bear the titles "wise" and "librarian" respectively. On the left there is a group of three standing noblemen, carved in high relief. They present their hands crossed on the chest in an attitude of reverence towards the ruler. The one who is closest to the king may be Yoaat B'alamli, a ruler of Yaxchilan apparently exiled in Piedras Negras. Below the throne is a row of seven sajalob, secondary lords, seated in profile, admirably sculpted, in perfect proportions. It is almost certain that everyone was originally wearing headdresses; the character that is closest to the central front part of the throne has the head of an elongated bill heron. Unfortunately, the heads of the other figures that appear in front of it are destroyed; but it is probable that they have been sculpted in full rounded on top of the depression that forms the throne. The content of the extensive inscription consists of 158 hieroglyphs divided into 14 groups, with six dates that take place over a period of eight years. In the end the death of Governor 4 is mentioned in 757 AD, his funeral two days later in front of the temple O-13, and the re-entry to his tomb by Ruler 7 in 782 AD.

This object can be downloaded with a base here. 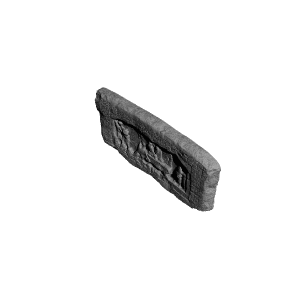