3D
360°
Scan The World
1,706 views 93 downloads
Community Prints Add your picture
Be the first to share a picture of this printed object
0 comments

The spotlights were all pointed at Sanmicheli and Veronese, two protagonists of the 16th Century in Verona since the beginning of the great commemorative and monumental nineteenth-century season. At first the city intended to place this sculpture at the head of a sequence of statues arranged similarly to those in Prato della Valle in Padua. Later, they were assigned to Piazza dei Signori, where, however, the Monument to Dante was instead inaugurated in 1865.

The unfortunate Veronese, for whom Della Torre had presented this sketch, could not therefore find a location. Della Rotte was a tormented romantic artist who found refuge in Florence after participating in the Milan riots, and disappeared at the young age of twenty-eight without having been able to leave any public marks in the city. His sketch was only translated into marlbe in 1888 by Romeo Cristani; it was first placed in front of Sant'Anastasia and finally transferred to the Giarina Gardens in 1919.

Paolo Caliari, known as Paolo Veronese (1528 – 19 April 1588), was an Italian Renaissance painter, based in Venice, known for large-format history paintings of religion and mythology, such as The Wedding at Cana (1563) and The Feast in the House of Levi (1573). Included with Titian, a generation older, and Tintoretto, a decade senior, Veronese is one of the "great trio that dominated Venetian painting of the cinquecento" and the Late Renaissance in the 16th century. Known as a supreme colorist, and after an early period with Mannerism, Paolo Veronese developed a naturalist style of painting, influenced by Titian. 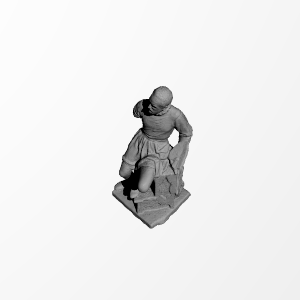