3D
Scan The World
2,735 views 162 downloads
Community Prints Add your picture
Be the first to share a picture of this printed object
0 comments

One of the great Neoclassical sculptor Canova's most famous compositions represents Paris judging which of the three god desses, Juno, Minerva, or Venus, was the most beautiful. Reputedly the most handsome mortal, Paris wears the Phrygian cap characteristic of the region of present-day Turkey, where he lived. His calm pose and serene gaze give no hint of the aftermath of the moment; once he bestowed the golden apple held behind his back upon Venus and received her bribe of Helen, wife of Menelaus, the disastrous Trojan War ensued. Canova carved the first version of this subject for Joséphine de Beauharnais between 1808 and 1812; it is now in the Hermitage Museum, Saint Petersburg. Another was made for Prince Ludwig of Bavaria and is now in Munich. Our new acquisition was recorded as unfinished in Canova's studio at his death in 1822. Together with a Venus (acc. no. 2003.21.1), it was completed by the sculptor's assistants the following year on commission from the third marquis of Londonderry, who was returning to England through Rome after representing his country at the Congress of Vienna.

Although there are some supports on the model, it is easy to clean and no risk to break any part on the model when it is cleaning. If you print it big enough, cleaning process will be easier. Enjoy your print. 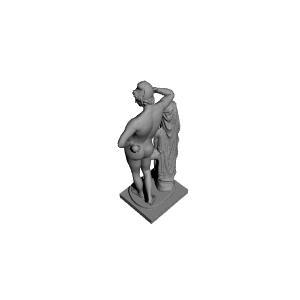 ×
0 collections where you can find Paris at The State Hermitage Museum, St Petersburg by Scan The World