3D
Scan The World
4,763 views 297 downloads
2 collections
Community Prints Add your picture
Be the first to share a picture of this printed object
0 comments

This marble fragment is of a sculpture of Aphrodite (or Venus) crouching. It is part of a series of replicas called 'Aphrodite courching', a piece of Greek work created in 250 BC attributed to Doidalsas of Bithynie. The Crouching Venus is a Hellenistic model of Venus surprised at her bath (also uploaded on the Scan The World archive!). Venus crouches with her right knee close to the ground, turns her head to the right and, in most versions, reaches her right arm over to her left shoulder to cover her breasts. To judge by the number of copies that have been excavated on Roman sites in Italy and France, this variant on Venus seems to have been popular.

A number of examples of the Crouching Venus in prominent collections have influenced modern sculptors since Giambologna and have been drawn by artists since Martin Heemskerck, who made a drawing of the FarneseCrouching Venus that is now in Naples. 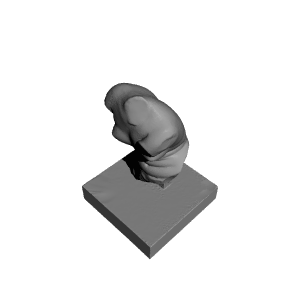 ×
2 collections where you can find Part of Crouching Venus at The Louvre, Paris by Scan The World