3D
Scan The World
2,923 views 112 downloads
1 collection
Community Prints Add your picture
Be the first to share a picture of this printed object
0 comments

Hermes, a messenger god, sits looking in the direction of the procession. He wears sandals, and a traveller's hat (petasos) rests on his knee. The figure wholeans on his shoulder is probably Dionysos, god of wine. His left arm was supported by a staff (thyrsos).

East Block IV shows four men leaning on sticks and to the right of them three gods and a goddess sitting. The four men, draped in simple cloaks, should be taken together with the pair of men who stand at the head of the southern branch of the procession on Block III and the four men standing and at the head of the procession on Block VI. They are seen as eponymous heroes or as civic dignitaries, possibly magistrates waiting to preside over the ceremonies.
At the centre of the East frieze the gods are shown seated waiting for the ceremony to begin. All four on this Block face the southern branch of the procession. On the left Hermes is shown with a hat resting on his knee. On his feet he wears short boots, possibly winged, and a drill-hole in the right hand indicates that he was holding his wand or caduceus. Next to Hermes another male figure twists round in his seat to observe the approaching procession. One arm rests on the shoulder of his companion, while the other is supported by a staff, now missing. He is thought to be Dionysus and the staff must therefore have been a rod crowned with a pine cone. Dionysus’ right leg overlaps with the left foot of the next figure, Demeter. She sits with her chin, now missing, resting on one hand, and in the other she holds a down-turned torch of tightly bound straw. Seated next to Demeter is Ares. He cradles one knee in his clasped hands, while the other leg rests on a spear, part of which is preserved beneath the ankle. The rest must have been painted in. The three male gods are naked but for cloaks that have slipped down and are around their middle. Demeter wears a peplos or a heavy woollen tunic and over it she also wears a mantle, which covers her lower part and clutches together over the upper thigh and pelvis.
For more information on the pedestrian-procession see East frieze Block III. 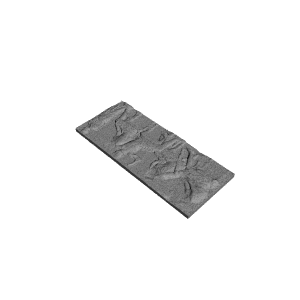 ×
1 collections where you can find Parthenon Frieze _ East IV, 22-27 by Scan The World