3D
Scan The World
3,146 views 122 downloads
1 collection
Community Prints Add your picture
Be the first to share a picture of this printed object
0 comments

The peplos was a robe renewed every four years, when it was taken by the procession of the Great Panathenaic festival and dedicated to a statue of Athena on the Acropolis. The robe was woven with scenes of a mythical battle between the gods and giants. Weaving began nine months before the Panathenaia at another festival, the Chalkeia. Two girls, appointed to serve Athena, the arrephoroi, set the warp up on the loom. 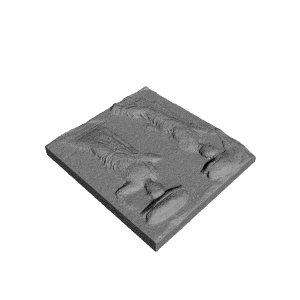 ×
1 collections where you can find Parthenon Frieze _ East V, 31-32 by Scan The World