3D
Scan The World
2,246 views 99 downloads
Community Prints Add your picture
Be the first to share a picture of this printed object
0 comments

Marble relief (Block XLVII) from the North frieze of the Parthenon. The frieze shows the procession of the Panathenaic festival, the commemoration of the birthday of the goddess Athena.
Like the southern branch of the procession, the northern branch comprises mounted horsemen, chariots, elders, musicians, pitcher-bearers, tray-bearers and figures leading sacrificial victims. 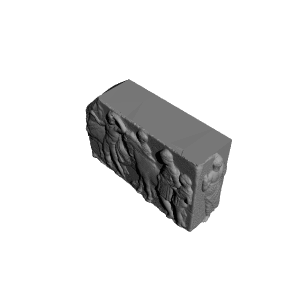 ×
0 collections where you can find Parthenon Frieze _ North XLVII, 132-136 by Scan The World