3D
Scan The World
1,755 views 67 downloads
Community Prints Add your picture
Be the first to share a picture of this printed object
0 comments

This block shows parts of three riders. The lead rider is bare-headed, wears a chlamys over a short tunic and is without boots. To his right another rider wears only a tunic, belted at the waist and with long sleeves. A third figure is largely lost at the junction of this block and an adjacent one (Block XXXVIII). The horsemen of the cavalcade on the North frieze are composed of a series of phalanxes overlapping one on another in an unequal division. There is among the riders of the North frieze great variation in composition and in dress. Some are heavily draped in mantle and tunic, while others are all but naked. Some ride bareheaded, while others wear a distinctive form of cap. Metal reins, which are now lost, were inserted in drill-holes.
The head of the horse and rider’s arm, the fragment joined to the top right corner, was added in 1850. It was discovered by George Scharf in the Smith Barry Collection of Marbury hall in Cheshire. 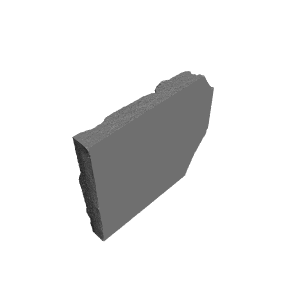