3D
Scan The World
2,379 views 100 downloads
1 collection
Community Prints Add your picture
Be the first to share a picture of this printed object
0 comments

The block survives as the representation of parts of three horsemen, wearing armour. They form a group of six with the ones on the previous block. The armour is of the kind made of plates of reinforced leather, comprising a corselet, shoulder straps and waistband hung with a series of straps worn over a short tunic. The riders wear animal skin boots with top flaps and a cap with a long tail. Metal reins, which are now lost, were inserted in drill-holes. 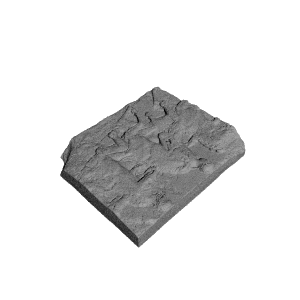 ×
1 collections where you can find Parthenon Frieze _ South XIII, 35-37 by Scan The World