3D
360°
Featured Scan The World
3,512 views 395 downloads
4 collections
Community Prints Add your picture
Be the first to share a picture of this printed object
0 comments

Marble metope from the Parthenon (South metope II). The South metopes in The British Museum show the battle between Centaurs and Lapiths at the marriage-feast of Peirithoos.

A Lapith stands in front of a Centaur, kneeling on the Centaur’s back and clasping his throat with his left hand. The Centaur, facing right, has been thrown on his right foreleg, his head is forced back and his mouth wide open. The fingers of his right hand grasp the right shoulder of the Lapith. A chlamys hangs over the Lapith’s left arm and behind his back. The Centaur’s left arm and right foreleg and the Lapith’s head and right arm are missing. Parts of the frame are restored.The human Lapith forces his centaur opponent down, gripping him by the throat. THe line of the Lapith's body crosses the centaur at a diagonal. This compositional devisse was popular in Greek art for depicting scenes of strife. 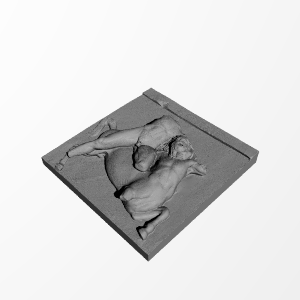