3D
Scan The World
3,248 views 170 downloads
1 collection
Community Prints Add your picture
Be the first to share a picture of this printed object
0 comments

Marble metope from the Parthenon (South metope III). The South metopes in The British Museum show the battle between Centaurs and Lapiths at the marriage-feast of Peirithoos.
A Lapith, on the right, attacks a Centaur, from behind, resting his right knee on the Centaur’s hindquarters and extending his right arm to seize the Centaur’s neck. The upper body of the Centaur is turned back towards his attacker. An animal skin is wound around his left arm. A long chlamys hangs from the shoulders of the Lapith and he wears boots. Dowel holes, in his left side and at the junction of the chlamys, are visible and probably served for the attachment of metal weapons. The left arm and left foot of the Lapith, the Centaur’s right arm and three of his legs, and the heads of both figures and parts of the frame are missing.The centaur is surprised from behind and turns his human body sharply round. He fends off the Lapith with his left arm, wrapped in an animal skin. Drill holes in the Lapith's torso idicate the attachment of a baldric, now lost. 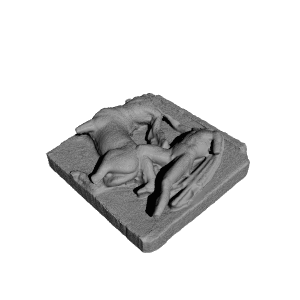