3D
Scan The World
2,998 views 118 downloads
1 collection
Community Prints Add your picture
Be the first to share a picture of this printed object
0 comments

A young Lapith is embraced by a centaur. The Lapith's missing right arm is brought up to resist the monster's advances, but overall the action is less violent here than in other metopes. The Lapith's head is in Athens. The upper part of the relief is restored. This metope was once in the collection of Count Choiseul Gouffier, French ambassador to Turkey. A Centaur, on the left, presses his left hand in to the left shoulder of the Lapith, who tries to ward him off. A long chlamys falls behind the back of the Lapith. Of the Lapith only the torso and left upper arm survived. The head is in the Acropolis Museum, Athens. The Centaur’s head, part of his back, his right arm and legs are missing. Parts of the frame are restored. 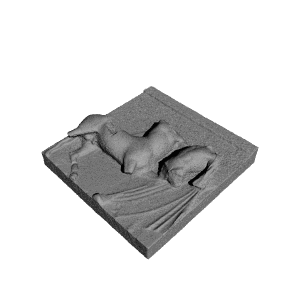