3D
Scan The World
2,940 views 145 downloads
1 collection
Community Prints Add your picture
Be the first to share a picture of this printed object
0 comments

Marble metope from the Parthenon (South metope VII). The South metopes in The British Museum show the battle between Centaurs and Lapiths at the marriage-feast of Peirithoos.
With his left hand a Lapith, on the left, grasps a Centaur. His right arm is drawn back and he probably once held a metal sword, now lost, in his hand, about to strike the Centaur. A chlamys fastened on his right shoulder falls over his left arm and flies out behind his back. The Centaur, rearing up, tries to pull away the Lapith’s left hand. From the shoulders of the Centaur hangs a small chlamys. The head of the Centaur is in the Acropolis Museum, Athens, and the Lapith’s head is in the Musée du Louvre, Paris. The Lapith’s hands, left foot and the right leg below the knee are missing. As are the Centaur’s left arm below the shoulder and part of his left hind leg and parts of the frame. 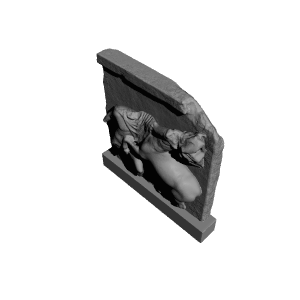