3D
Scan The World
3,329 views 137 downloads
1 collection
Community Prints Add your picture
Be the first to share a picture of this printed object
0 comments

Marble metope from the Parthenon (South metope XXVI). This metope is from the eastern half of the south side of the temple. The South metopes in the British Museum show the battle between Centaurs and Lapiths at the marriage-feast of Peirithoos.
A Centaur, on the right, rearing up to strike a Lapith, has raised his arms above his head. The Lapith thrusts his left foot against the equine chest of the Centaur and presses his left hand against the Centaur’s right elbow. A chlamys hangs down at the Lapith’s back. On the left upper arm are two holes for the attachment of metal decoration. There is another attachment hole on the flank of the Centaur. Parts of the right hind leg appear to have been attached by metal rivets. The Lapith’s head and right arm, the Centaur’s left foreleg, left hind foreleg, left arm and right hand and parts of the frame are missing. Plaster drapery possibly was added to the roughly worked patch of the background between the Lapith’s raised arm and leg. 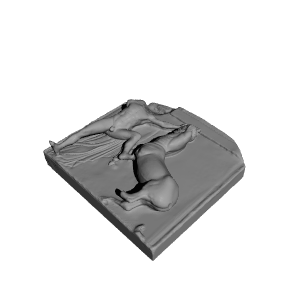