Party In The Box

3D
360°
1,021 views 20 downloads
Community Prints Add your picture
Be the first to share a picture of this printed object
0 comments

Party In The Box

This object was made in Tinkercad. https://www.tinkercad.com/things/4mZ9NhvaJmF

Story of Party in the Box

There once was a person named Party. On his second birthday Sadness swept through the world like a famine. It starved the people of happiness and light. Party’s parents created a box with enough happiness and colors to last a few years, but there was a catch. Due to how quick Sadness was spreading and lack of materials, the box was only big enough for one person. His parents said goodbye to their beloved baby boy, fearing they would never see him again, as they put him in the box. They shut the lid as Sadness took them.

Party lived in the box for ten years. While he was in the box it collected all the laughter and joy he created. Meanwhile Sadness plagued the land until there was no happiness left. Party decided to leave his happy home and explore the world outside the walls. He opened the lid and jumped out of the box. He stood silent and motionless as he took in the scene before him.

The world was dreary and gray. He saw everyone else shuffling their feet here and there. No one made any move to brighten up their world. Party realized that he could help these people. He rushed back to his box and opened the lid again. Bright, colorful, confetti exploded from the box followed by music and a parade. All of his fun and laughter had accumulated in the box, so there was now enough for everyone. The people stopped to watch as the box exploded in a gigantic cloud of sparkles and light. They stared in awe as glitter rained down from the sky. The children were the first to laugh. The adults soon followed. Soon the world erupted in laughter and song. The world was never plagued by Sadness again.

Now you can share the joy with Party. Join him while he takes you on a fun adventure. Party comes with three cups, plates of cake, and party hats, because more people sharing the adventure means more fun! Now you can be like Party and bring fun and light into your world. How will you share the joy?

Caution: Keep away from children 3 and under. Some parts may be a choking hazard for small children.

Only Party (the figure) has some supports.  Party needs to be laid down to print.  You need to print the box and lids at 210% 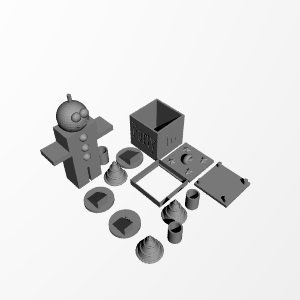