3D
Scan The World
3,859 views 326 downloads
1 collection
Community Prints Add your picture
Be the first to share a picture of this printed object
0 comments

The statue is broken. Parvati, the wife of Shiva, holds in her left hand a now-broken figure of her child Skanda; her other child, the elephant-headed Ganesha, can be seen near her right foot. Beneath her lotus throne is the lion she customarily rides. Above her, elephants pour water over her in a gesture of homage. Behind you is a sculpture of a related goddess, Durga. This work and the one were made within fifty miles each other but several centuries apart.

Parvati is the Hindu goddess of love, fertility and devotion. She is the goddess of divine strength and power.  She is the gentle and nurturing aspect of the Hindu goddess Shakti. She is the mother goddess in Hinduism and has many attributes and aspects. Each of her aspects is expressed with a different name, giving her over 100 names in regional Hindu mythologies of India. Along withLakshmi (goddess of wealth and prosperity) and Saraswati (goddess of knowledge and learning), she forms the trinity of Hindu goddesses. Parvati is the wife of the Hindu deity Shiva - the destroyer, recycler and regenerator of universe and all life. She is the daughter of the mountain king Himavan and mother Mena. Parvati is the mother of Hindu deitiesGanesha and Karttikeya. Her elder sister is the goddess Ganges. Some communities also believe her to be the adopted sister of Vishnu. With Śiva, Pārvatī (Durga) is a central deity in the Saivism sect of Hinduism. In Hindu belief, she is the recreative energy and power of Śiva, and she is the cause of a bond that connects all beings and a means of their spiritual release. In Hindu temples dedicated to her and Śiva, she is symbolically represented as argha or yoni. She is found extensively in ancient Indian literature, and her statues and iconography grace ancient and medieval era Hindu temples all over South Asia and Southeast Asia. 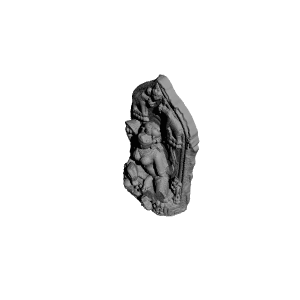 ×
1 collections where you can find Parvati at The Asian Art Museum, San Francisco by Scan The World