3D
Featured Scan The World
6,493 views 1,126 downloads
18 collections
Community Prints Add your picture
Be the first to share a picture of this printed object
0 comments

Pauline Bonaparte as Venus Victrix ("Venus Victorious") is a semi-nude life-size reclining neo-Classical portrait sculpture by the Italian sculptor Antonio Canova. Reviving the ancient Roman artistic traditions of portrayals of mortal individuals in the guise of the gods, and of the beautiful female form reclining on a couch (as most often seen in reclining portrayals of Hermaphroditi), it was commissioned by Pauline Bonaparte's husband Camillo Borghese and executed in Rome from 1805 to 1808, after the subject's marriage into the Borghese family. It then moved to Camillo's house in Turin, then to Genoa, only arriving in its present home (the Galleria Borghese in Rome) around 1838. 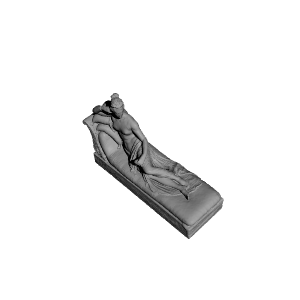