According to M. Dreyfous in Dalou: Sa Vie et Son Oeuvre, this composition was based on a group entitled Juno Suckling the Infant Hercules, which the artist later destroyed. Two slightly reduced versions of this composition exist: one in the Hermitage, St Petersburg, and the other also in the V&A (Museum no. A.27-1912). The slight reduction in size of these two versions suggests they were cast from a mould taken from this piece, but they may have been slightly reworked by the artist.

There are also a number of small-scale versions of this group. A terracotta (height 45 cm) in the collection of Mr and Mrs Michael Travers (formerly in the collection of P. M. Turner) is signed and dated 1872. It is possible that this is the original sketch model, as it is the earliest dated version of the group. Another terracotta is in the Fitzwilliam Museum, Cambridge (dated 1873; height 49 cm), and there are two in private collections.

A plaster version is in the Petit Palais, Paris (height 52 cm). This was the model for editions by Susse Frères in bronze and Sèvres in biscuit porcelain (no. 1045). A marble version of the same group, probably a workshop piece (height 94.5 cm) was sold by Matthiesen's, London, in 1955 to an English private collection. From there it passed in 1986 to a French private collection. An engraving of this composition (a mirror image) was made by Achille-Isodore Gilbert and published in 1876 in an article about the London art world in the journal L'Art. A drawing, also a mirror image, was then made from this engraving by Vincent Van Gogh. 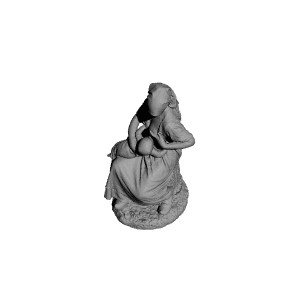 ×
2 collections where you can find Peasant Nursing a Baby by vam
×
Myo-Gul BAE
@BMG
2
Posted at: 27th September 2021
Loading comments...