3D
Scan The World
1,579 views 48 downloads
Community Prints Add your picture
Be the first to share a picture of this printed object
0 comments

This portion of a pediment probably belonged to the temple of gens Flavia, which once occupied the area of the Baths of Diocletian. it shows a portrayal of the goddess Ceres dressed in a tunic, chiton, made of lightweight fabric that leacves her right breast exposed. The background of the relief is filled with sheaves of wheat, used as divine symbols for this goddess of agriculture, fertility and the harvest.

She may have been depicted on a throne or emerging from a leafy setting. As a tutelary deity of the Roman plebs, Ceres became a clear instrument of political propaganda during the imperial period to indicate the empire's prosperity. 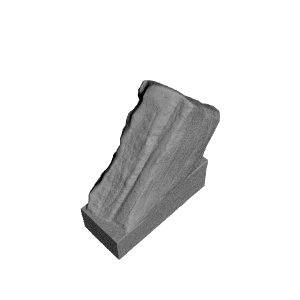