Pegasus at the Boboli Gardens in Florence, Italy

3D
Scan The World
4,239 views 538 downloads
9 collections
Community Prints Add your picture
Be the first to share a picture of this printed object
0 comments

Pegasus at the Boboli Gardens in Florence, Italy

The statue of Pegasus was made by by Aristodemo Costoli (1803-1871), an italian sculptor who spent his entire career in the city of Florence. His students included Girolamo Masini, Augusto Rivalta and his son Leopoldo Costoli. This piece is located next to a slope covered with lawns that leads from the Boboli Gardens back to the level of the Palazzo Pitti, the Ducal palace of Cosimo I de’ Medici, the first of the Grand Dukes of Tuscany. Palazzo Pitti was originally built by one of the Medici family’s competitors to exceed in every way their Palazzo Medici, but it was later bought by Eleonora di Toledo de’ Medici. The hill behind the Palazzo Pitti, excavated for stone to expand the buildings, was then turned into the Boboli Gardens, a segmented strolling garden with statues, fountains, grottoes, water tricks and other features which became the most often copied of the Italian Formal Gardens. Boboli’s design influenced formal gardens in the rest of Europe. The formal garden was started by Niccolo Tribolo, but he died the next year and the work was assigned to Bartolomeo Ammannati, a student of Bartolommeo Bandinelli who closely followed the style of Michelangelo (which may have greatly annoyed Baccio Bandinelli, who was fiercely jealous of Michelangelo and Cellini).

Give plenty of support to wings and front legs. 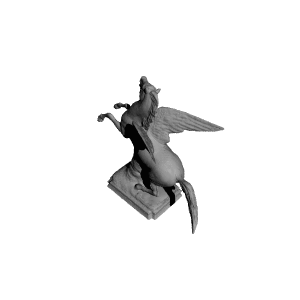 ×
9 collections where you can find Pegasus at the Boboli Gardens in Florence, Italy by Scan The World