Penelope at The Palais des Beaux-Arts in Lille, France

3D
Scan The World
3,350 views 193 downloads
Community Prints Add your picture
Be the first to share a picture of this printed object
0 comments

Penelope at The Palais des Beaux-Arts in Lille, France

This bronze sculpture by Antoine Bourdelle (Montauban, 1861 - 1929, Le Vésinet) is a copy from the original model created in 1909. Between 1905 and 1912, Bourdelle worked on a figure of Penelope, the wife of Ulysses, whilst waiting patiently for the return of his wife. Antiquity was a major inspiration for Boudelle and lead for him to renovate his style and the creation of new works to come after him in the 20th Century.

This Penelope follows the style of classic Greek antique sculpture in a 'Hanchée' position, a sort of contraposto, and stands in the form and is draped much like a caryatid (a kind of sculpture which would serve as a pillar but in the shape of a woman); she has the attitude of a Tanagra (The Tanagra figurines were a mold-cast type of Greek terracotta figurines produced from the later fourth century BCE, primarily in the Boeotian town of Tanagra). She has a simple form that is easy on the eye, a posture similar to indian sculpture which Bourdelle was a great admirer of.  Her curvature resembles old gothic Parisian sculptures from the XIV Century. These knowing references are put together in a mordern and geometric style; slightly cubic, old works in modern times. 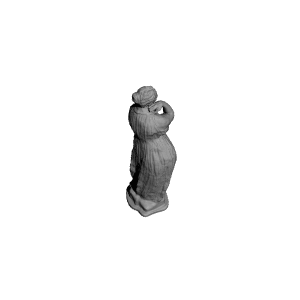 ×
0 collections where you can find Penelope at The Palais des Beaux-Arts in Lille, France by Scan The World