3D
360°
Scan The World
1,335 views 143 downloads
2 collections
Community Prints Add your picture
Be the first to share a picture of this printed object
0 comments

This is a small ancient Pergamene votive offering depicting an unknown nude man laying on his back with his right arm raised above his head holding a sword. He is a part of a group of four, together they constitute a copy of a votive offering made by a Pergamene dynast, probably Attalus II, placed along the south wall of the Athenian Acropolis in 167-166 BC. They represent four battles, two mytholofical and two historical. This one is the Giant. 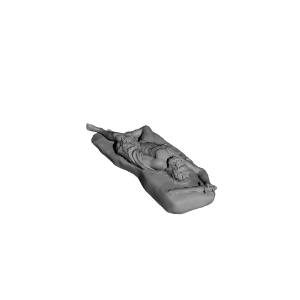