Perseus and Andromeda at The Louvre, Paris

3D
Scan The World
7,410 views 778 downloads
3 collections
Community Prints Add your picture
Be the first to share a picture of this printed object
0 comments

Perseus and Andromeda at The Louvre, Paris

This impressive larger than life marble group sculpture illustrates an episode from Ovid's Metamorphosis. Andromeda, tied to a rock, is to be delivered to an ocean monster which terrors the region, sent by Neptune to avenge Juno's outrage over the beauty of the princess. Perseus, the son of Jupiter and Danae, kills the dragon by presenting it the head of Medusa who would turn her enemies to stone. Perseus delivers Andromeda after marrying her.

The sculpture was executed between 1689 and 1684 as a commission for King Louis XIV, probably with the collaboration of the sculptor Christophe Veyrier. It was originally placed in the gardens of the Palace of Versailles in 1685 before coming to The Louvre, Paris, where it is on permanent display.

I had to scale the model down to fit the platform and the woman's right foot didn't print because of the small detail and angle. Other than that the print turned out nice and requires supports. 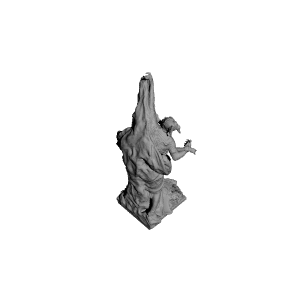 ×
3 collections where you can find Perseus and Andromeda at The Louvre, Paris by Scan The World