3D
Scan The World
6,143 views 302 downloads
1 collection
Community Prints Add your picture
Be the first to share a picture of this printed object
0 comments

This is a slightly larger than life marble sculpture depicting Perseus and Medusa, it was sculpted by Laurent Honoré Marquete (1875-1903) and is on permanent display at the Glyptothek in Copenhagen. The subject matter depicts the moment in which Perseus beheads the Gorgon Medusa; When Perseus was grown, Polydectes came to fall in love with the beautiful Danaë. Perseus believed Polydectes was less than honourable, and protected his mother from him; then Polydectes plotted to send Perseus away in disgrace. He held a large banquet where each guest was expected to bring a gift. Polydectes requested that the guests bring horses, under the pretense that he was collecting contributions for the hand of Hippodamia, "tamer of horses". Perseus had no horse to give, so he asked Polydectes to name the gift; he would not refuse it. Polydectes held Perseus to his rash promise and demanded the head of the only mortal Gorgon, Medusa, whose eyes turned people to stone. Ovid's account of Medusa's mortality tells that she had once been a woman, vain of her beautiful hair, who had lain with Poseidon in the Temple of Athena. In punishment for the desecration of her temple, Athena had changed Medusa's hair into hideous snakes "that she may alarm her surprised foes with terror".

PS: the blade have been separeted from the model to make it printable. 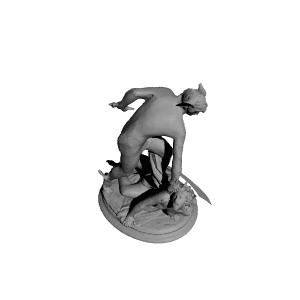 ×
1 collections where you can find Perseus fighting Medusa at The Ny Carlsberg Glyptotek, Copenhagen by geoffrey.marchal