3D
360°
Scan The World
2,827 views 189 downloads
1 collection
Community Prints Add your picture
Be the first to share a picture of this printed object
0 comments

In Greek mythology, Perseus is the legendary founder of Mycenae and of the Perseid dynasty. Among his tasks, he beheaded the Gorgon Medusa who could turn people to stone with her stare, and saved Andromeda from the sea monster Cetus. He was the son of Zeus and the mortal Danaë, whom Zeus visited in the shape of golden rain, as she was locked away by her father, the king of Argos.

This depiction shows Perseus holding Medusa's cut off head, which is the usual portrayal of the hero, but the creature's head unfortunately hasn't lasted. 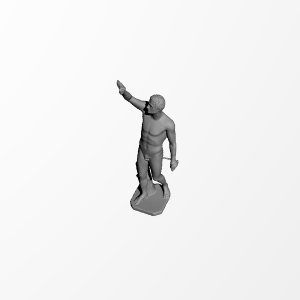