Phoenix at the Guimet Museum, Paris

3D
Scan The World
3,515 views 143 downloads
2 collections
Community Prints Add your picture
Be the first to share a picture of this printed object
0 comments

Phoenix at the Guimet Museum, Paris

A phoenix or phenix is a long-lived bird that is cyclically regenerated or reborn. Associated with the sun, a phoenix obtains new life by arising from the ashes of its predecessor. The phoenix was subsequently adopted as a symbol in early Christianity. In some versions of the legend, the phoenix dies in a show of flames and combustion, although there are other versions in which the legendary bird dies and simply decomposes before being born again. According to some legends, the phoenix could live over 1,400 years before rebirth. Herodotus, Lucan,Pliny the Elder, Pope Clement I, Lactantius, Ovid, and Isidore of Seville are among those who have contributed to the retelling and transmission of the phoenix motif.

In the historical record, the phoenix "could symbolize renewal in general as well as the sun, time, the Empire, metempsychosis, consecration,resurrection, life in the heavenly Paradise, Christ, Mary, virginity, the exceptional man, and certain aspects of Christian life".

Images of an ancient bird have appeared in China for over 8000 years, as earliest as the Hongshan neolithic period,[citation needed] on jade and pottery motifs, then appearing decorating bronze as well as jade figurines. Some believe they may have been a good-luck totem among eastern tribes of ancient China.

During the Han Dynasty (2,200 years ago) two phoenixes, one a male (feng, 鳳) and the other a female (huang, 凰) were often shown together facing one other. Later, during the Yuan Dynasty the two terms were merged to become fenghuang, but the "King of Birds" came to symbolize the empress when paired with a dragon as a dragon represented the emperor. From the period of the Jiajing Emperor (1522–66) on, a pair of phoenixes was differentiated by the tail feathers of the two birds, typically together forming a closed circle pattern—the male identified by five long serrated tail feathers or "filaments" (five being an odd, masculine, or yang number) and the female by what sometimes appears to be one but is in fact usually two curling or tendrilled tail feathers (two being an even, feminine, or yinnumber).

Also during this period, the fenghuang was used as a symbol representing the direction south. This was portrayed through a male and female facing each other. Their feathers were of the five fundamental colors: black, white, red, green, and yellow. These colors are said to represent Confucius' five virtues:

The phoenix represented power sent from the heavens to the Empress. If a phoenix was used to decorate a house it symbolized that loyalty and honesty were in the people that lived there. Or alternatively, a phoenix only stays when the ruler is without darkness and corruption (政治清明).

It is a symbol of the Chinese Empress, this bird is one of the four principal mythological beasts. Red coloured, it embodies the South. 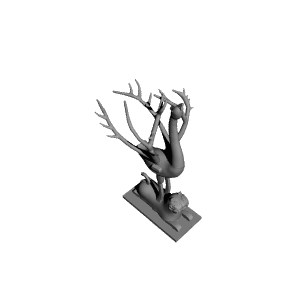 ×
2 collections where you can find Phoenix at the Guimet Museum, Paris by Scan The World