n 1884, the mayor of Calais commissioned Auguste Rodin to create a monument as a tribute to the citizens of the French port town. The creation was aptly named The Burghers of Calais. The French sculptor's design was inspired by an episode in the Hundred Years' War in 1347, when the heroism of six burghers saved Calais from total destruction and ended the English siege to city. Barefoot, dressed in gunny sacks and with nooses around their necks, they handed over the keys of the city to the King of England. Rodin rendered the story in a unique and innovative way. He deviated from the rules of sculpting by working out each burgher separately and by not placing them on a pedestal but at the same level as the viewers, so that they stood amidst the crowd, as it were. This rendering of Pierre de Wissant. Burgher of Calais, one of the six burghers, is strikingly realistic. The tormented posture, the expressive gesture and the wonderfully modelled surface enhance the sense of despair and drama exuded by the figure.

A work of patience

Today, Auguste Rodin is considered to have steered sculpting in a new direction, but in his own day, his work was often heavily criticised. Although he had already completed the monument in 1886, it would not be erected until 1895, on a pedestal rather than at the viewers' level as the artist had intended. The pedestal was removed in 1924, seven years after Rodin's death.

On his slow procession towards death, Pierre De Wissant turns round and lifts his right arm back, just like setting free a bird 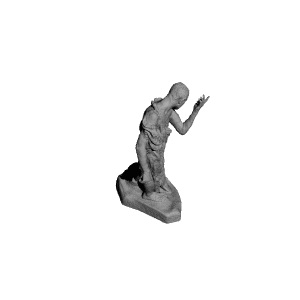