3D
Scan The World
2,994 views 110 downloads
1 collection
Community Prints Add your picture
Be the first to share a picture of this printed object
0 comments

Pierrot (French pronunciation: ​[pjɛʁo]) is a stock character of pantomime and Commedia dell'Arte whose origins are in the late seventeenth-century Italian troupe of players performing in Paris and known as the Comédie-Italienne; the name is a hypocorism ofPierre (Peter), via the suffix -ot. His character in contemporary popular culture—in poetry, fiction, the visual arts, as well as works for the stage, screen, and concert hall—is that of the sad clown, pining for love of Columbine, who usually breaks his heart and leaves him for Harlequin. Performing unmasked, with a whitened face, he wears a loose white blouse with large buttons and wide white pantaloons. Sometimes he appears with a frilled collaret and a hat, usually with a close-fitting crown and wide round brim, more rarely with a conical shape like a dunce's cap. But most frequently, since his reincarnation under Jean-Gaspard Deburau, he wears neither collar nor hat, only a black skullcap. The defining characteristic of Pierrot is his naïveté: he is seen as a fool, often the butt of pranks, yet nonetheless trusting.

n the last year of the century, Pierrot appeared in a Russian ballet, Harlequin's Millions a.k.a. Harlequinade (1900), its libretto and choreography by Marius Petipa, its music by Riccardo Drigo, its dancers the members of St. Petersburg's Imperial Ballet. It would set the stage for the later and greater triumphs of Pierrot in the productions of the Ballets Russes. 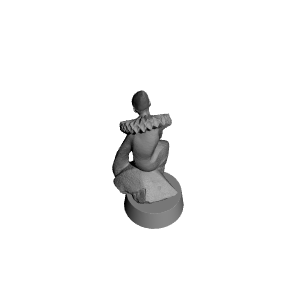 ×
1 collections where you can find Pierrot by Scan The World