3D
Scan The World
1,886 views 46 downloads
Community Prints Add your picture
Be the first to share a picture of this printed object
0 comments

Pietro Tenerani (1789- 1869) was an Italian sculptor of the Neoclassic sculpture. He was born in Torano, near Carrara. He initially trained with his maternal uncle Pietro Marchetti, and in 1813, obtained a shollarship to study in Rome. There he studied mainly in the studio of Thorvaldasen.  He was prolific and worked in a chaste neoclassical style into the mid-nineteenth century, specialising in pious subjects. His most prominent commission was for the tomb of Pope Pius VIII in Rome.

Giuseppe Obici, was born in Spilamberto near Modena , in the street that bears his name , Joseph Howitzers since childhood showed a strong inclination for the arts ; He grew up , attended the seminar at the same time ( to take advantage of a family legacy ) and the Academy of Fine Arts in Modena , and then devoted himself exclusively to the latter . In 1834 thanks to a scholarship from the Duke Francesco IV d'Este moved to Carrara to follow the Academy of Improvement , then from 1837 he was in Rome , the city that he decided not to leave even to go up to the supply side of the ducal chair of sculpture at the Academy of Modena. Howitzers died in Rome in 1878 and was buried there , but in 1981 his remains were moved in the cemetery of Spilamberto . 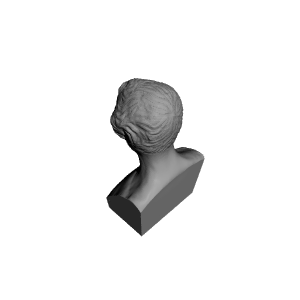 ×
0 collections where you can find Bust of Pietro Tenerani in Florence, Italy by Scan The World