3D
360°
1,282 views 50 downloads
2 collections
Community Prints Add your picture
Be the first to share a picture of this printed object
0 comments

If you've got a hankering for old-school mutants that a single head alone won't fix, why not take a look at my Patreon?

Lurking in the dark underbellies of the Spire Cities, or skulking in the wreckage of derelect spaceships, are the mutants. Shunned and hated by the Empire of Humankind, these strange men, whether born with their bizarre abnormalities or having gained them by the warping of reality itself, form strange societies of their own. Those of particular skills or talents will sometimes be sought out by Errant Merchants or members of His Majesty's Inquisition to serve in their retinues.

This will need to be printed on supports. I have been happy with the results laying it at a 30°-45° angle in Prusaslicer and letting the auto-support function take care of it. If you lay it with the face away from the build plate, any scarring from the supports will blend in nicely with the pimples or pustules on the back of the head. The head in the example picture was printed at with 0.01mm layers, but you could almost certainly get away with 0.02mm without much loss of detail. 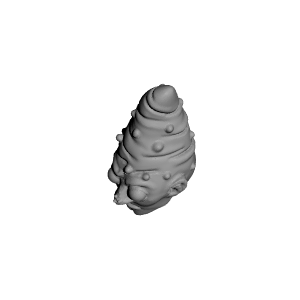 ×
2 collections where you can find Pimply Conehead Mutant by IIGargoylesStudio