3D
1,478 views 101 downloads
1 collection
Community Prints Add your picture
Be the first to share a picture of this printed object
0 comments

This is an accessory for Pocket-Tactics forces that include Conjured units:

Conjured Units: When a unit has a parenthetical value attached to their cost, this means that the unit must be Conjured. This value does not affect the base point value of the unit, though is used to bring the Conjured unit to the map (see below). Conjured units may not be brought to the map through the base tile and are not considered to be in reserves. Rather, they are kept in the Aether Queue and require a Summoner's Dial to be summoned.

At the beginning of the match, your Summoner's Dial starts at Zero. Each round you activate a unit with at least one Magic OFF dice to do a move action, you may turn the Summoner's Dial clockwise a single value. Once the Summoner's Dial has reached a value equal to or greater than the Comjuration cost of the unit (the Cost value in parenthesis), you may, instead of summoning or activating another unit, turn the dial counter-clockwise a number of values equal to the Conjuration cost and bring a Conjured unit to the map. The conjured unit may enter any unoccupied tile adjacent to an allied unit with a minimum of one Magic OFF dice. As with a normal summon, the unit being conjured is not subject to hazard effects when it is summoned into a hazard tile.

When a Conjured unit is defeated, rather than go to enemy captures, it is returned to the Aether Queue and may be summoned again, provided the terms for conjuration can be met.

Printed at a layer height of .30 and 10% infill. Models were painted with model acrylics. 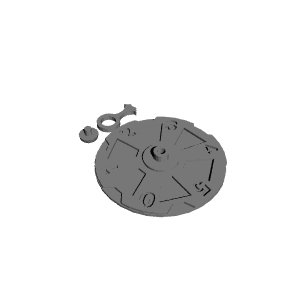 ×
1 collections where you can find Pocket-Tactics: Summoner's Dial (Second Edition) by dutchmogul