Portrait bust of the Emperor Gallienus

3D
Scan The World
2,250 views 84 downloads
Community Prints Add your picture
Be the first to share a picture of this printed object
0 comments

Portrait bust of the Emperor Gallienus

This portrait represents an authoritative young man with his head turned to the ight. He wears a lorica and a fringe-borded paludamentum, held on the right shoulder by a fibula. The fibula is in the shape of a disc and has a floral pattern added in the 17th century. The bottom part of the bust has a horizontal cut and the marble surface looks reworked.

The man's hair is curly, with bangs on his wrinkled forehead, and his virls, very voluminous on the temples, reach the nape, leaving his ears free. His eyes have well-outlined and carved pupils, and wide eyebrows. His busy moustache lok reworked, and his beard, made of short curls, covers the cheeks, the chin and the upper part of the neck. 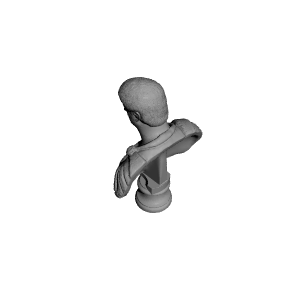