Portrait Head of a Man at The Dallas Museum of Art, Texas

3D
Scan The World
2,968 views 91 downloads
Community Prints Add your picture
Be the first to share a picture of this printed object
0 comments

Portrait Head of a Man at The Dallas Museum of Art, Texas

This head is of the finest quality of the imperial workshops in the late Hadrianic or early Antonine period. The emperor Hadrian had begun a fashion for portraying himself bearded like a Greek philosopher. His love of things Greek led to a revival of classical Greek style applied to typical Roman art forms like state reliefs and portraits of distinguished Romans. This elegant style continued under Hadrian's successor, Antoninus Pius. The bravura carving of this splendid head, with its pensive expression and subtle contrast between the light beard and curly hair is close to portraits of Antoninus Pius, though with more character than the stolid-appearing emperor. 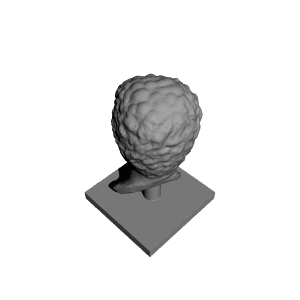 ×
0 collections where you can find Portrait Head of a Man at The Dallas Museum of Art, Texas by 3DLirious