3D
360°
Featured Scan The World
1,472 views 44 downloads
1 collection
Community Prints Add your picture
Be the first to share a picture of this printed object
0 comments

Octavia Minor -- the eldest sister of the first Roman Emperor Augustus and the fourth wife of Mark Antony --was a prominent figure in the Imperial household, respected and admired by contemporaries for embodying the Augustan feminine virtues of chastity, piety and loyalty. She was commonly depicted with the nodus hairstyle, with a roll of hair swept up over her forehead, running back over the crown of her head and narrowing into a braid, which merges with the rest of her pulled-back wavy locks, then braided and fashioned in a chignon at the nape of her neck. The coiffure was unique, an original Roman creation rather than inspired by earlier Greek or Etruscan styles, which was the norm of coiffures during the late 1st century B.C. It remained fashionable from approximately 40 B.C. until 30 A.D. Despite the extended period of popularity, Jucker (p. 50, op. cit.) reasons that this portrait can be quite accurately dated due to the top bun becoming smaller and flatter over time, and the lowering of the chignon at her neck. The portrait of Octavia Minor closely recalls the example from Velletri now at the Museo Nazionale Romano (fig. 191 in E. Bartman, Portraits of Livia). 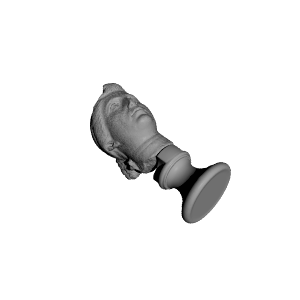