3D
Scan The World
3,597 views 460 downloads
2 collections
Community Prints Add your picture
Be the first to share a picture of this printed object
0 comments

This portrait, in greyish marble, was once part of a larger-than-life full length statue. Now only the head remains, broken off at the neck. Most of the front half of the man's head is broken as well.

Portraits of the hellenistic era were often idealised as they were designed for propaganda for a powerful figure rather than depicting accurate likenesses. But this man emerges strongly as an individual; he appears to be a mature man, perhaps late middle aged with short wavy hair and a closely trimmed beard. He has wide, rather fleshy cheeks, a square jaw and a bump in his nose, looking as if it had been broken at some time in his life. His brow is furrowed and his lips are tightly compressed giving him a tough, determined expression.

The only features that are not shown in lifelike detail are the eyes, which stare out vacantly. These, no doubt, would have been coloured once. We don't know who this man was. The large size of the head suggests the sculpture was part of a public monument, so he was certainly an imminant figure . He doesn't wear a crown , so he can't have been a ruler when the statue was erected. He does have a very regal bearing though,  so he may well have been a member of a socratic or royal family. 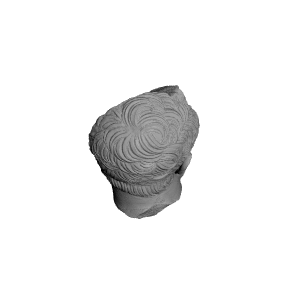