Portrait of a freed slave (?)

3D
Scan The World
1,562 views 46 downloads
Community Prints Add your picture
Be the first to share a picture of this printed object
0 comments

Portrait of a freed slave (?)

Rome differed from Greek city-states in allowing freed slaves to become plebeian citizens. The act of freeing a slave was called manumissio, from manus, "hand" (in the sense of holding or possessing something), and missio, the act of releasing. After manumission, a slave who had belonged to a Roman citizen enjoyed not only passive freedom from ownership, but active political freedom (libertas), including the right to vote. A slave who had acquired libertas was known as a libertus ("freed person," feminine liberta) in relation to his former master, who was called his or her patron (patronus).

As a social class, freed slaves were liberti, though later Latin texts used the terms libertus and libertini interchangeably. Libertini were not entitled to hold public office or state priesthoods, nor could they achieve legitimate senatorial rank. During the early Empire, however, freedmen held key positions in the government bureaucracy, so much so that Hadrian limited their participation by law. Any future children of a freedman would be born free, with full rights of citizenship. 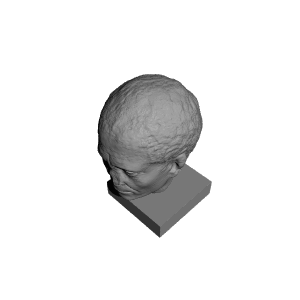 ×
0 collections where you can find Portrait of a freed slave (?) by Scan The World