Portrait of a girl, Minatia Polla

3D
360°
Featured Scan The World
1,789 views 189 downloads
2 collections
Community Prints Add your picture
Be the first to share a picture of this printed object
0 comments

Portrait of a girl, Minatia Polla

This Roman marble portrait, the so-called Minatia Polla, is a sculpture now housed in the National Museum (Terme) in Rome (inv.1043). Found in the Tomb of L.Sulpicus Platorinus and Sulpcia Platorina in 1880, the work is dated to ca. 40 AD and is thus of the Julio-Claudian period.

Little is known about Minatia Polla, aside from her being called a beautiful young girl of 16 years of age. The name was inscribed (among many others) on the pedestal of the tomb where she was found, so the identification of this bust is not confirmed. 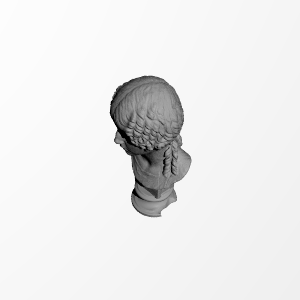 ×
2 collections where you can find Portrait of a girl, Minatia Polla by SMK - Statens Museum for Kunst