Portrait of a Marcus Antonius

Portrait of a Marcus Antonius

Marcus Antonius (14th January 83 BC - 1st August 30 BC), commonly known in English as Mark Antony, was a Roman politician and general who played a crucial role in the transformation of the Roman Republic from an oligarchy into the autocratic Roman Empire.

This bust, titled 'male portrait with strong, curly hair' in The Statens Museum for Kunst's catalogues, depicts Mark Antony. The original work, carved out of fine-grained yellowish marble, was created in the Flavian age between 69 and 96 AD and is housed in the Chiaramonti Museum, Vatican Museums. The work was found in a cave at Tor Sapienza. 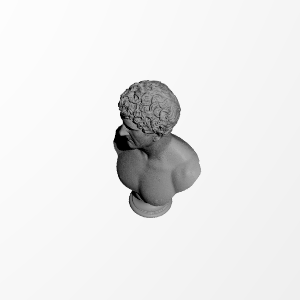