Portrait of a Mourner

3D
Scan The World
2,111 views 109 downloads
Community Prints Add your picture
Be the first to share a picture of this printed object
0 comments

Portrait of a Mourner

This sculpture is part of a tomb of Philip the Bold, Portrait of a Mourner.

The Mourners: Tomb Sculptures from the Court of Burgundy features thirty-seven sculptures from the tomb of John the Fearless (1371–1419), the second duke of Burgundy. His elaborate tomb, once housed at a monastery on the outskirts of Dijon, is now one of the centerpieces of the Musée des Beaux-Arts de Dijon.

During the 14th and 15th centuries, the Valois dukes of Burgundy ruled over extensive territories in present day France, Luxembourg, Belgium, and the Netherlands from their capital in Dijon, which during their reign became a major center of artistic patronage. Their court’s sculpture workshop produced some of the most profound and original art of the period. The tombs of the first and second Burgundian Dukes, Philip the Bold and John the Fearless, are among the summits of their achievement. Each tomb includes in its lower register an elaborate arcade in the flamboyant gothic style, populated by a solemn processional of alabaster figures of monks and clerics that appear to circulate around the tomb as if it were a cloister. These sculptures, known as the mourners, are small-scale embodiments of late medieval devotion. While some of the figures are shown wringing their hands or drying their tears, others appear lost in solemn contemplation, while still others hide their faces in the deeply carved folds of their robes. 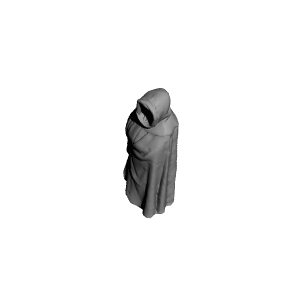