Portrait of a Retired Townsman at The British Museum, London

Portrait of a Retired Townsman at The British Museum, London

The figure gazes out at us with an air of calm. His crystal eyes give him a gently human expression. Many successful townsmen, as they grew older, took Buddhist vows. Like monks they often had their heads shaven, abandoning vanty. Some continued to live busy secular lives, others went into semi-retirement to prepare spiritually for death.

Townspeople believed that by making portraits such as this one, often as a memorial after death, they would preserve the success of their family. In effect the head of the household was still watching over them.

This print is made on MakerBot Replicator Fifth Generation. The dimension of the model 65mm x 97mm x 80mm, Infill 10%, with support and layer high 0,2. Provides very nice results! 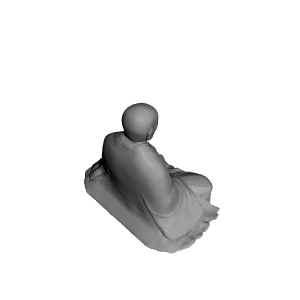 ×
0 collections where you can find Portrait of a Retired Townsman at The British Museum, London by Scan The World
×
3D construction
@construction
0
Printed on: Ultimaker 2
Material: PLA
Posted at: 24th October 2021
Loading comments...