Portrait of a Roman, the so-called 'Tivoli General'

3D
360°
Featured Scan The World
3,081 views 208 downloads
5 collections
Community Prints Add your picture
Be the first to share a picture of this printed object
0 comments

Portrait of a Roman, the so-called 'Tivoli General'

This portrait is a cropped plaster copy of an originally full-figure sculpture of the so-called 'Tivoli General'. The sculpture, presumably a Roman general, notably illustrates the tension between two distinct yet contemporaneous artistic styles. The face of the man is rendered in the traditionally Roman veristic style, where 'flaws', such as wrinkles or battle-scars, are accentuated in order to convey certain characteristics for the individual (for instance, wisdom or courage). On the other hand the General's body, not featured in this cast, is depicted with a god-like, youthful perfection typical of Greek artwork. Pieces like the Tivoli General express the culture clash between traditional Roman artistic style (and perhaps values) with increasing Greek cultural influence in the late Republic/early Empire. 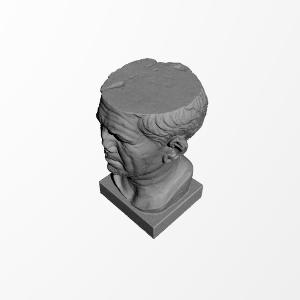 ×
5 collections where you can find Portrait of a Roman, the so-called 'Tivoli General' by SMK - Statens Museum for Kunst