3D
Scan The World
1,644 views 90 downloads
Community Prints Add your picture
Be the first to share a picture of this printed object
0 comments

Russian sculptor Paolo Troubetzkoy grew up in Italy 'in a noble and artistic environment' during the Scapigliatura period, the Milanese avant-garde.

Since 1914 he lived successively in Moscow and Paris, where he befriended Leo Tolstoj, Auguste Rodin and Gabriele D'Annunzio. From Rodin Troubetzkoy took the typical sketchy technique, which is visible in this portrait of an unknown woman. Typical of his early work, the rough surface of the images in which the modeling technique in clay was substitued by the harsh version in bronze. Following that way Troubetzkoy was contrasting the smooth face of the woman with her seemingly sketchy built body. 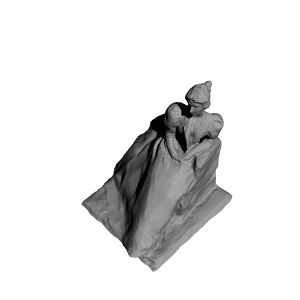