Portrait of a Young Girl at The State Hermitage Museum, St Petersburg

3D
Scan The World
4,410 views 458 downloads
1 collection
Community Prints Add your picture
Be the first to share a picture of this printed object
0 comments

Portrait of a Young Girl at The State Hermitage Museum, St Petersburg

He was the pupil of his father, Jean-Louis Lemoyne, and of Robert Le Lorrain. He is commonly referred to as Jean-Baptiste II Lemoyne or "the younger" to distinguish him from his uncle of the same name, the sculptor Jean-Baptiste Lemoyne the Elder.

He received the prix de Rome awarded by the Académie royale de peinture et de sculpture, but remained in Paris to aid his blind father. he was a great figure in his day, around whose modest and kindly personality there waged opposing storms of denunciation and applause, as the Rococo style he embodied was rejected in favor of Neoclassicism; Charles Othon Frédéric Jean-Baptiste de Clarac asserted that he had delivered a mortal blow at sculpture. His freedom of composition was read as disregard of the classic tradition and of the essentials of dignified sculpture and he was accused of lack of firmness and of intellectual grasp of the larger principles of his art.

Lemoyne's more important works have for the most part been destroyed or have disappeared. The equestrian statue of Louis XV for the military school, and the composition of Pierre Mignard's daughter, Mme Feuquières, kneeling before her father's bust (which bust was by Coysevox) were destroyed in the French Revolution. The bas-relief panels only have been preserved.

In his portrait busts we have a remarkable series of important portraits, of which those of women are perhaps the best. Among Lemoyne's leading achievements in this class are Fontenelle (at Versailles), Voltaire, Latour (all of 1748), the duc de la Vrillière(Versailles), comte de Saint-Florentin, and Crébillon (Dijon Museum); the actresses Mlle Chiron and Mlle Dangeville (illustration, left), both produced in 1761 and both at the Théâtre Français in Paris, and Madame de Pompadour, the work of the same year. Of Pompadour he also executed a statue in the costume of a nymph, very delicate and playful in its air of grace. Lemoyne was perhaps most successful in his training of pupils, among them Étienne Maurice Falconet Pigalle, Caffiéri, and Augustin Pajou. 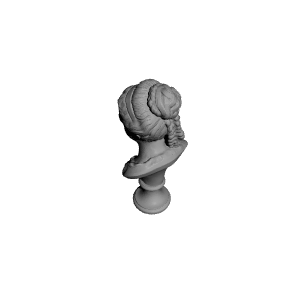 ×
1 collections where you can find Portrait of a Young Girl at The State Hermitage Museum, St Petersburg by Scan The World